The Tiernans are just back from a trip to Trondheim. It was, in part, a research foray for my next novel, a sequel to ‘Cuthbert of Farne’ which will focus on the fate of the Community of St Cuthbert in the aftermath of the Norman Conquest. There are some extraordinary narratives from that time, one of which stretches all the way to Norway. I was there to find out more.

Trondheim is a small city located roughly halfway up the coast of Norway. It lies on the far side of a great fjord some eighty miles in length and sits on a semi-island formed by a long looping curve of the river Nid. Think Durham, perched on just such a loop of the River Wear. Or think of the same topography at Old Melrose, site of Cuthbert’s first monastery. Strange how these half-island promontories recur in the Cuthbert story.

From the start of the trip I was beguiled by Norwegian. In spite of some superficial similarities to German and English, it is unique in its structure and intonation. Nine vowels, just for starters, and all of them pronounced in counter-intuitive ways. Sometimes it has an uncompromising simplicity. The international airport is signed Utland. (Pronounced ‘Oot’ with a kind of dipthong) Outland. Everywhere that is not Norway is Outland. Outlandish. We stayed in a suburb called Bakklander. The Backlands, where the poor lived. Why the -er on the end? It’s the definite article, as a suffix. It is pronounced like a French e with an acute accent.

Other words are half a sentence long, bristling with strange combinations of consonants that are unpredictably pronounced or ignored altogether. I became addicted to the Learn Norwegian playback on the iPad. Hours passed deciphering public notices and cereal packets. At night I lay in bed rolling ‘Snakker du Engelsk?’, do you speak English? around my mouth (it is pronounced Snockeh Doo Ehnguls, with the g as in ting, and an upward intonation) I never got a chance to say it. Everyone in Norway, from the bus driver to the till assistant in the supermarket speaks good English. But I believe that Norse is somewhere in my DNA. Deep down I am really Katrin Tomassdatter. Or Olafsdatter. Or Haraldsdatter. All Norse kings (and most other people) were called Olaf or Harald interchangeably. One of them, Olaf II, became the patron saint in 1030 after being killed in battle by his subjects. Olaf was Norway’s first Christian king but his conversion methods – maiming and torture – were unpopular. Nevertheless, his death counted as a martyrdom and Europe’s northernmost Gothic cathedral was built in his honour. People still make the 400 mile pilgrimage from Oslo to his shrine. 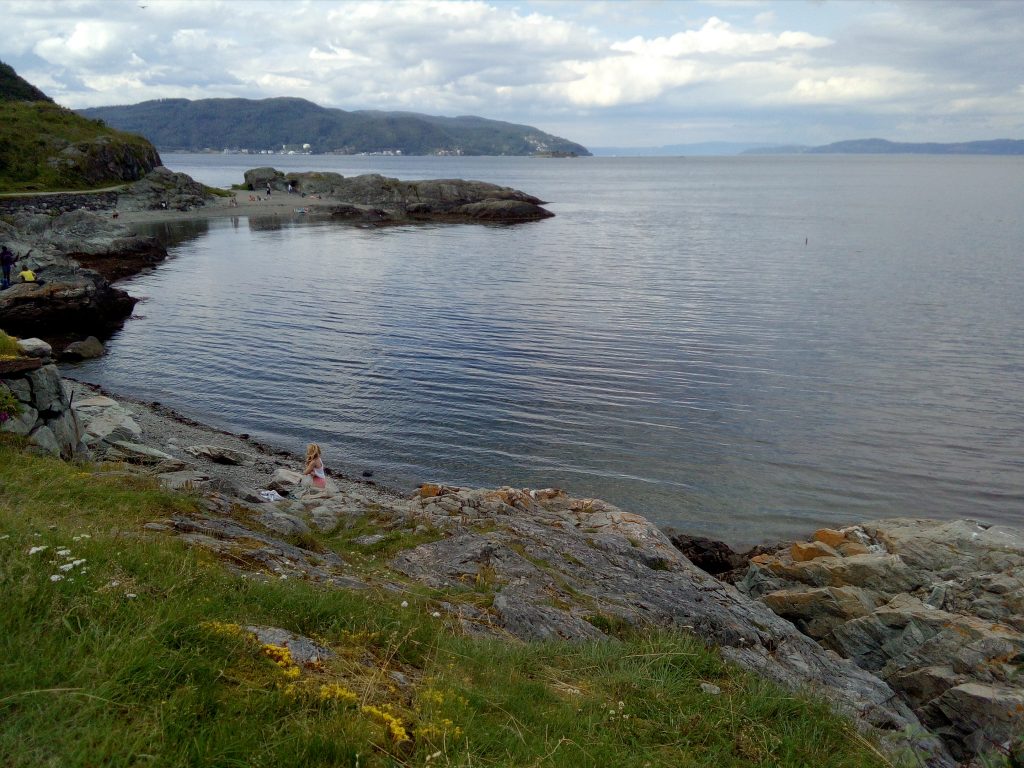 The other, more frivolous reason for visiting Trondheim was its status as one of Europe’s top five cycle friendly cities. For me, nothing can compare with the joy and freedom of cycling around an unfamiliar city on a summer’s day, seeing the sights, hopping off to look in a shop or gaze at some lovely vista. Trondheim does bikes properly; there are bike lanes and stands of city bikes to hire at every turn. My kind of city. Part of Trondheim was rebuilt after a fire in Victorian times and the fine wide streets they built are lined with lime trees. All of them were in full bloom and the air was filled with the scent of lime blossom. There were quiet shady squares to explore, old churches, lines of colourful wooden merchants’ houses lining the riverside, the little sandy beaches and clear deep water of the fjord. Luckily most of the seventy thousand students were still on vacation; nevertheless tourists like us had to keep a sharp eye out for student speed freaks hurtling along the cycle lanes.

Unfortunately the spouse had a near-death experience when the brakes on his bike jammed. He was thrown over the handlebars and into the adjacent bus lane, bringing a new resonance to the phrase ‘If I fall under a bus…’ Luckily the bus was some way behind and many kindly Norwegian ladies hurried to his aid. But he never quite regained his enthusiasm for cycle expeditions.

Back in the eleventh century, Trondheim was called Nidaros. It was one of the first towns in Norway. It was probably little more than a trading post, but nevertheless it served as the capital of the Norse kingdom. In 1068 a young Anglo-Norse cleric called Thorgot arrived there, seeking refuge at the court of Olaf Knyrre – Olaf the Peaceful. Thorgot had been held hostage by the Normans in Lincoln, part of the Danelaw at that time. He had managed to escape and fled to his mother’s homeland. He formed a close bond with Olaf and helped him develop the Norse church. Thorgot was also to have a formative impact on the story of St Cuthbert and his Community in Northumbria. How did that come about? You’ll have to read the next novel.

Brexit notwithstanding, for centuries the UK has gravitated towards Western Europe. But it was very different in the Viking Age and it requires an effort to reorient our perspective. During that time half of England, the Danelaw, was under Viking control. Norse and Danish kings repeatedly invaded England, and by the eleventh century the English were ready to accept a Viking king. From 1016 to 1035 England was part of a great Northern Empire ruled by Canute the Great, king of Norway, Sweden, England, Iceland, Orkney and the Western Isles. Canute was arguably one of the greatest kings of England and brought peace and prosperity to the country. In 1066 William of Normandy was not the only contender for the throne of England. The Norse too believed they had a historic right to the crown. A separate invasion was launched by Harald Hardrada, king of Norway, who captured York before being surprised and killed by Harold Godwinson at Stamford Bridge. The Normans themselves were descendants of the North men, but they had become assimilated into Western European culture and were French speaking. With William’s arrival, England’s centre of gravity shifted decisively and permanently to the continent. It was a traumatic and bloody dislocation. If things had gone differently, if Hardrada had triumphed instead, perhaps I would have been speaking Norse today.