Belong to a book club?

Each month the Church Times Book Club publishes a full account of a novel for book club readers, with accompanying questions for discussion. In July 2021 ‘Cuthbert of Farne’ was featured in this way – see below. If you’re thinking of suggesting ‘Cuthbert of Farne’ to read with your club, this is a great introduction.

THE lives of British saints of the Dark Ages have proved a rich fountain of material for the novelist in recent years. There have been several imaginings of the life of St Hilda. Now, Katharine Tiernan has turned her attention to Hilda’s contemporary, the northern St Cuthbert.

The author’s fascination with the saint leads her to research the historical background of the period, one of great political and religious upheaval, in which he was directly involved, and she uses the material intelligently. The sources for Cuthbert’s own life are few, and the most important, Bede’s Ecclesiastical History of the English People, naturally focuses on the saint’s spirituality and miracles, although it calls him a “soldier for Christ”. Another, an anonymous history written by a monk shortly after his death, tells us that he came from a well-to-do background and, like all boys of his station in Anglo-Saxon Northumbria, was a warrior, and took part in at least one battle.

Tiernan takes this as her starting point, showing the saint entrusted to a beloved foster mother as a baby after the death of his own mother — a relationship that would shape the warm and affectionate relationships he had with women throughout his life. She also makes the highly plausible suggestion that it was the shocking outcome of a campaign in which he was involved which turned his path towards God.

The story develops from three different viewpoints. A third-person narrative shows us how Cuthbert, fleeing from the violence that he has witnessed, finds refuge in a monastery and is drawn into a daily routine where he finds friendship and a vocation as he struggles to learn humility and interpersonal skills. He learns to fast, and “learned the loosening of the physical world that hunger brought”. Later, he will resist an attempted seduction by a Scottish princess, and later still feel called to the solitary life on the island of Farne, where he toils alone to build his hut and grow food, making friends with the birds, until the king recalls him to be Bishop of Hexham.

Queen Enfleda of Northumbria is a witness to the struggle between the Celtic Church and the Roman, headed by the turbulent Wilfred, Cuthbert’s exact contemporary. She is present at the Synod of Whitby and sees the victory of the Roman tradition, to the dismay of Cuthbert and his abbot, Eata.

Enfleda’s daughter, Aelfled, was given to God as a child, and succeeded Hilda as Whitby’s abbess. Bede shows her as having a particular affection for Cuthbert, 20 years her senior, and it was she who wrapped him in his shroud when he was reinterred. In Tiernan’s capable hands, Cuthbert is her mentor from early childhood, asking her a riddle every day and giving her fat hazelnuts or an apple when she answers correctly. We see the saint’s spiritual development through her eyes, and she is sent as the king’s emissary, a position of great importance, to persuade Cuthbert to leave his hermitage and take up his bishopric. 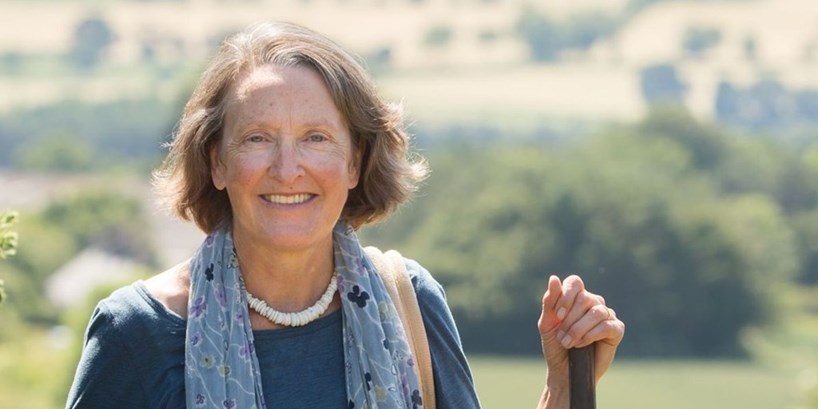 The author Katharine Tiernan, who lives in Northumberland within sight of Lindisfarne, which features in all three of her Cuthbert novels

Tiernan enters into the heads of her characters, with their different voices, and sees what they see. The images that she uses are theirs: “Once started, his confession spilt out of him like milk boiling out of a pan.” The story’s physical settings are also beautifully imagined. She writes with all five senses, and dwells lovingly on tiny details, as in this description of digging: “The edge of the spade cut cleanly into the turf turning up long pale roots of couch grass with spear-like shoots and small bright cups of celandine.

“He tossed it onto the pile at the side, then straightened, lifted back the spade and drove it in again. The regular line of dark earth lengthened behind him. The stems left a milky trail on his hands as he shook the earth off the clod. A robin hopped close to the spade, darting at the fat worms squirming in the clods. Although the wind was bitter, there was a cold vigour about the day. The sap was rising and he felt spring in his blood.”

It is to be wondered, however, quite where her knowledge of what a severed head looks like after some weeks comes from.

Tiernan has a flair for psychological insight, and an imagination that fills in the gaps in the historical record without ever doing violence to what is likely. She is also possessed of a vivid visual imagination, and an illuminator’s eye for detail. For me, one of the narrative’s most attractive features is the love that binds the characters to each other: husband to wife, adult to child, and brother to brother, despite the violent background.

This would appeal to anyone who is interested in the Early Church, or a saint’s spiritual journey. Most important, it will have a particular attraction if you like historical fiction. As a child, I fell in love with Rosemary Sutcliff for her ability to create personalities and anchor them in a finely drawn physical reality. Only as an adult did I appreciate the depth and subtlety of her narratives. Tiernan’s book has both qualities in abundance. If you love Rosemary Sutcliff, you’ll love Katharine Tiernan.

Fiona Hook is a writer and EFL teacher.

CUTHBERT OF FARNE — SOME QUESTIONS

“Lindisfarne to Durham: St Cuthbert and the Haliwerfolc”

Following on from my series of talks for the Berwick Educational Association, we are now planning a field trip! this will focus on St Cuthbert’s childhood and youth, with a day visit to the Leader Valley and Old Melrose.  If Covid restrictions allow, we hope to run the trip in June 2022. If you are interested in joining us, please email me at kmtiernan@gmail.com with your name and details, and I’ll contact you as soon as we know if the trip can go ahead.

TOURS: “In The Footsteps of St Cuthbert”

A particularly enjoyable part of researching my Lindisfarne novels has been visiting locations in Northumberland, Durham and the Scottish Borders associated with St Cuthbert. Many of these places are not only fascinating historically but have great spiritual presence. The Footsteps Tours grew out of a desire to share the experience of these places with others. The next proposed Footsteps outing is the BEA field trip above, restrictions permitting.

Past Tours have included…

The original Footsteps Tour. Two nights on Lindisfarne, starting with a pilgrimage walk across the sands, and with visits to St Cuthbert’s Cave and Inner Farne. From there to St Paul’s Church at Jarrow, monastery of Cuthbert’s first biographer, the Venerable Bede, and Jarrow Hall, home to the Bede’s World museum. Two nights in Durham, with visits to the Cathedral and Open Treasure exhibition, and to Chester-le-Street, home to the Cuthbert Community for 90 years before the move to Durham.

Lindisfarne and St Cuthbert. This can be a two hour visit to Lindisfarne, including an introductory talk, or a full day visit including a visit to St Cuthbert’s Cave and a pilgrimage walk across the sands.

Cuthbert’s early life. We visit the Leader Valley where he grew up, and Channelkirk, said to be the site of his childhood home. We then turn back to Melrose, to view the site of Old Mailrhos where Cuthbert entered his first monastery at the age of seventeen.

Please get in touch if you are interested in participating in, or arranging, a Tour.

TS Eliot writes about pilgrimage like this in Little Gidding:

If you came this way,
Taking any route, starting from anywhere,
At any time or at any season,
It would always be the same; you would have to put off
Sense and notion. You are not here to verify,
Instruct yourself, or inform curiosity,
Or carry report. You are here to kneel
Where prayer has been valid. And prayer is more
Than an order of words, the conscious occupation
Of the praying mind, or the sound of the voice praying.
And what the dead had no speech for, when living,
They can tell you, being dead; the communication
Of the dead is tongued with fire beyond the language of the living.
Here, the intersection of the timeless moment
Is England and nowhere. Never and always.
Four Quartets by TS Eliot